Observations About the Scalability of Data Loads in ADWC

In the last days, I am running a number of tests based on the TPC-DS benchmark against Oracle’s Autonomous Data Warehouse Cloud service (ADWC). One of the first thing I did is of course to create the TPC-DS schema and populate it. The aim of this blog post is to share some observations related to the population step.

I started by generating the data with the tool provided by TPC-DS: dsdgen. With the following command, I generated 1TB of data:

The tool generated, in about 24 hours, the following files:

There are two main ways to load that data into ADWC: SQL*Loader or the DBMS_CLOUD package. Since I decided to use the latter, I had to load those files into an object cloud service.

I settled to load them into Oracle’s Object Storage with the following command:

Since I used the defaults, the load was carried out by ten parallel threads. In case you wonder, it took almost 6 hours and during that time, two CPU cores were fully used.

Once all data was available in Oracle’s Object Storage, to decide how many CPU cores to allocate for the full load, I ran a number of loads of a single table of average size (CATALOG_RETURNS, ca. 22GB) and an increasing number of CPU cores allocated in ADWC. The simplified version of the PL/SQL block I used for one run was the following:

The following chart summarizes what I observed:

As you can see, as the number of CPU cores doubles, the load time decreased of factor 1.7-1.8. Which, in my opinion, is rather good. Note that I did not test with 128 CPU cores (the maximum ADWC supports), because I was not able to allocate so many CPU cores for a single service.

What I found interesting is to have a look at the way the database engine parallelize the loads. By the way, if you are asking yourself how the data is loaded, it is done with a simple SQL statement like “INSERT /*+ append enable_parallel_dml */ INTO “TPCDS1″.”CATALOG_RETURNS” SELECT * FROM COPY$RD0ZOZY5DB25HSH0CB24”. For that purpose, for every load, I generated a real-time SQL monitoring report for the INSERT statement. Here is, for each of them, the information about the parallel execution: 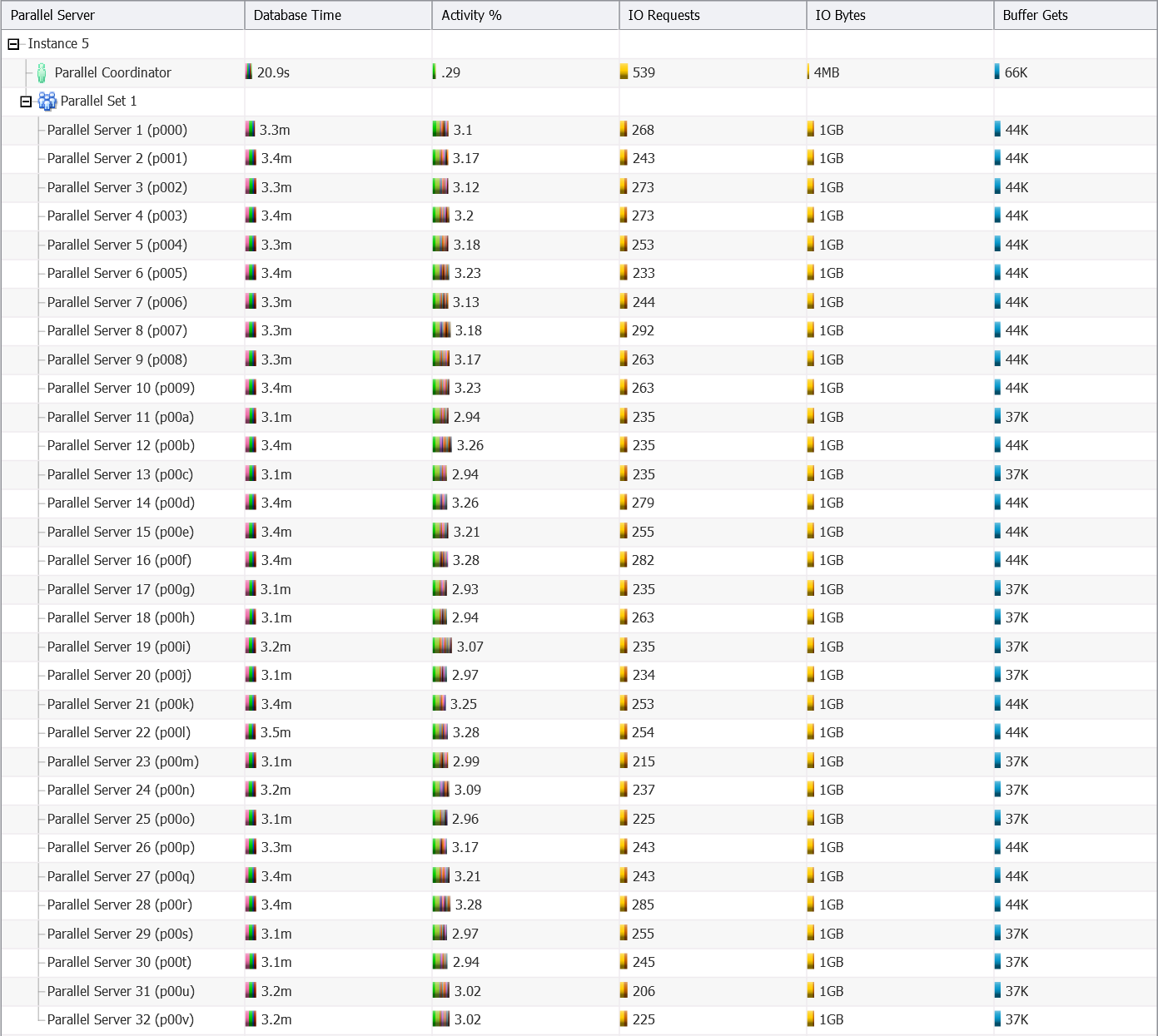 As you can see:

The last test I did was loading the full 1TB of data. The PL/SQL code I used was similar to the one used for the CATALOG_RETURNS table. The only major difference is an additional loop to process all tables/files. With 32 CPU cores allocated, the load took 67 minutes.

In summary, the loads scale well with an increasing number of CPU cores. But, be careful, because of the high DOP, they can also use all CPU resources of the service. It is therefore essential to start them wisely. E.g. by associating them with a sensible Resource Manager group.

Autonomous Data Warehouse, Object Storage, Oracle Cloud, Parallel Processing
Which Privileges Are Required to Use the ADWC Service Console?
V$SQL_CS_HISTOGRAMS: What Are the Buckets’ Thresholds?